How to Estimate Your Dog's Age in 5 Easy Steps 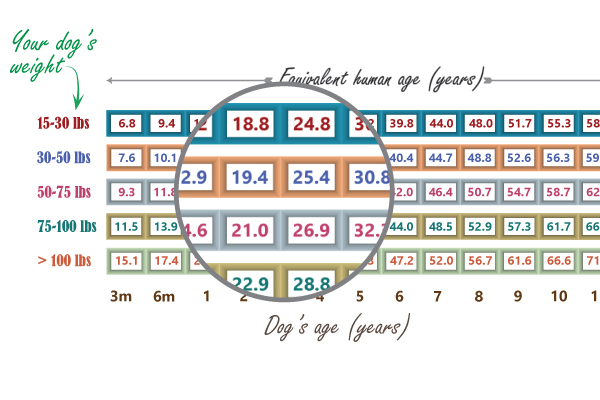 You know that dogs don’t grow and age at the same pace as humans.


The speed at which your dog is developing may well surprise you!

When they are very young, puppies need special care. They have to be vaccinated and wormed very early from 4 weeks of age. They should be weaned at the right time. Not too late, and especially not early so that they will not suffer from a separation anxiety disorder. This is a condition that occurs when a puppy is taken away from his mother too early, before 6 weeks after birth. It is almost impossible to cure later on.

Puberty also occurs quite early: 6 months on average. The young dog's behavior changes quite dramatically. You may get very upset if you discover your little beloved female puppy is pregnant and you didn’t even notice she was already pubescent.


Things get easier when your dog becomes an adult. Of course, you still need to provide good care and make sure that:

Everything should be fine until, again, you may get surprised by new disorders and symptoms that occur because your dog is aging more rapidly than you expected and sometimes, much more rapidly.

Dog is a heterogeneous species. Size, behavior, and susceptibility to diseases may vary a lot from one breed to another. That is what we are going to explain in this post.

All the data and illustrations in our
DOG AGE INFOGRAPHIC

One way to get an estimate of how old your dog is is to try to convert its age in human years that you are more familiar with.

The quickest way is simply to multiply the current age of your dog by 6. 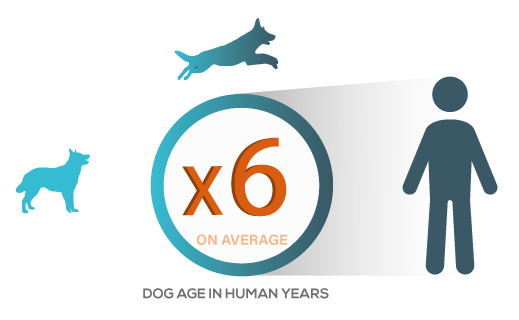 Of course this is not really accurate, because there are many other factors to take into account. But, well, this is the average, for all dogs, whatever their age.

To assess a dog's age more precisely in terms of human years, scientists use markers of physiological development such as puberty, adulthood, old age, and maximum lifespan. 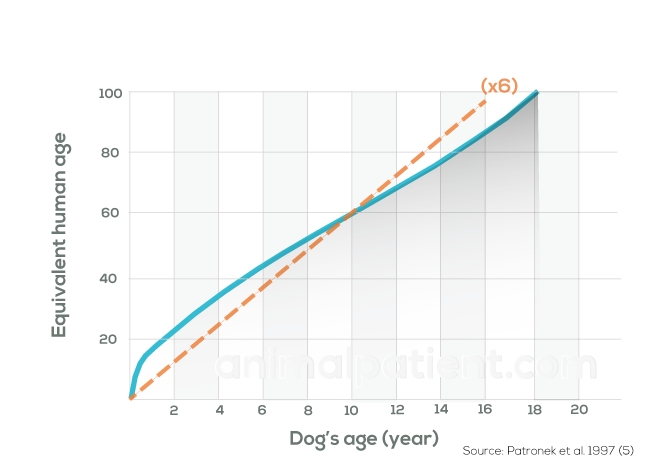 They found that dogs' growth is not parallel to humans'.

In fact, young puppies develop much faster than human children, especially during the few weeks following their birth. We should rather say that it is more the growth of young humans that is slower than the growth of puppies rapid, as compared to other mammals, domestic or in the wild.

Later on, dogs' growth, compared to humans', slows down and follows a linear pattern, at a rhythm of approximatively 5 years of human life for 1 year of dog life.

At the end of life, the aging process seems to accelerate again in dogs. But, aren't human beings able to prolong their life expectancy more than the rest of the mammal population on earth?

Not all dogs are created equal.

And far from it!

Among biologists there is a general agreement that the bigger a mammal species, the longer it can live. For instance, elephants can live more than 80 years. In the sea, Bowhead Whales are reported to live for 200 years. Scientists explain that the metabolism of small mammalian species is more active and generates more free radicals that are toxic to the organism.

Another theory proposes that mammalian species that experience high mortality rates (they are generally small and have a lot of predators) developed their survival strategy upon early sexual maturity and fertile reproduction rather than on anti-aging mechanisms.

But inside the canine species, it is exactly the contrary: the smaller the breed, the longer it lives.

There is a direct and proven negative correlation between weight and longevity.

No need to say this is a challenge for biologists who see their theories undermined. The reason why smaller breeds live longer has not been elucidated yet.

The best explanation, to date, lies within the rapid growth of dogs during the first year of their life. The larger the dog, the more rapid is its growth. For instance, giant breeds (Great Danes, St Bernard...) multiply their weight by 100 in their first year of age compared to 20 for the smaller ones and 3 for humans. This rapid growth pattern would cause the production of a larger amount of free radicals in larger breeds. These free radicals are deleterious for the body cells and are one of the causes of accelerated aging.

It is worth noting that during the last centuries, larger breeds have increased in size as a result of the selection by the breeders.

A team of researchers from Purdue University carried out a study on more than 23,000 dogs (Patronek et al. (5)). They confirmed that the physiological development of dogs was closely linked to their weight, as an inversed relationship as illustrated in the table below.

This finding is consistent throughout all the studies about life expectancy in domestic dogs. Mixed breeds live approximately one year more. The reason lies in what researchers call "hybrid vigor". Crossbred dogs have better fitness and are more able to fight diseases than their purebred parents suffering from the opposite "inbreeding depression".

This is another trend that also arises from scientific studies. It might be due to an increased risk of mammal cancer in females, for some breeds.

When it comes to longevity, size matters.

But, there are some exceptions to the weight rule.

Until now we have only considered natural progressive aging. But in real life, there are often unexpected problems, such as accidents or diseases. 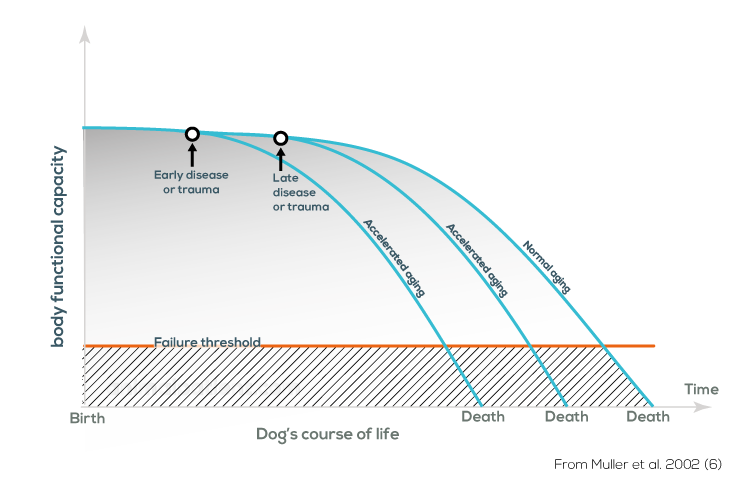 This figure takes into account not only physiological aging effects (we have seen on first 3 previous chapters), but also susceptibility to accidents and to lethal diseases that are different from one breed to another. The table below shows the result of a very recent study in the UK on more than 5,000 dogs.

So, don't be surprised if some smaller breeds have a shorter lifespan than expected. This is often an effect of increased susceptibility to heart diseases. This approach will be developed in the next chapter. 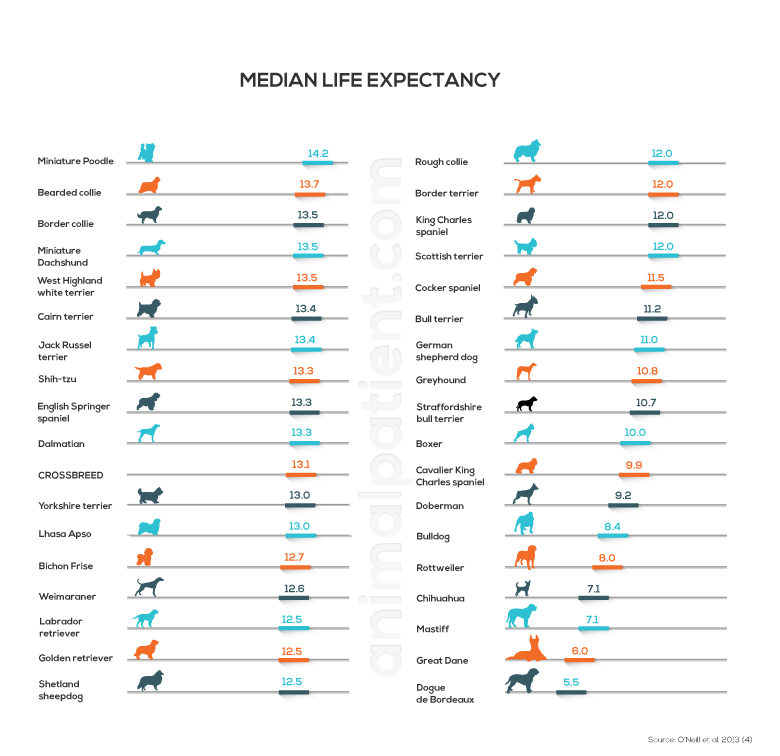 Aging is not a disease.

Aging is a natural process that consists of a progressive diminution of the body's ability to adapt to an aggressive environment. The decline of vital functions eventually leads to death.

But other events have an influence over the course of life.

They are accidents and diseases.

They have a negative impact on survival and on the median age of death. 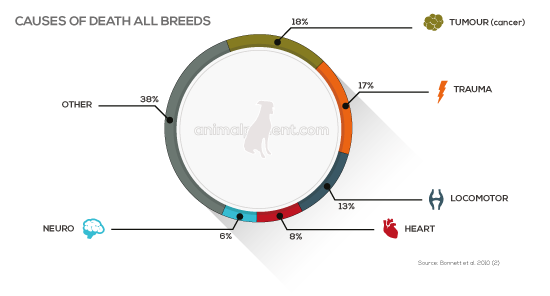 And here again, dog breeds are not at par. It is important that all dog owners be informed about the risks specific to their dog's breed so that they can try to prevent some of them.

Accidents are a frequent cause of death in dogs. They more often affect dogs that can leave the house and wander outside.

Small dogs that live mainly inside the house or larger watchdogs that are kept within the yard are less prone to be hit by a car on the road!

Over time and because of the strong selection made by their human masters in an effort to build breeds that look perfect to their eyes, numerous dog breeds have progressively developed a high susceptibility to some specific diseases. Have a look at this chart and see how large differences between breeds can be! 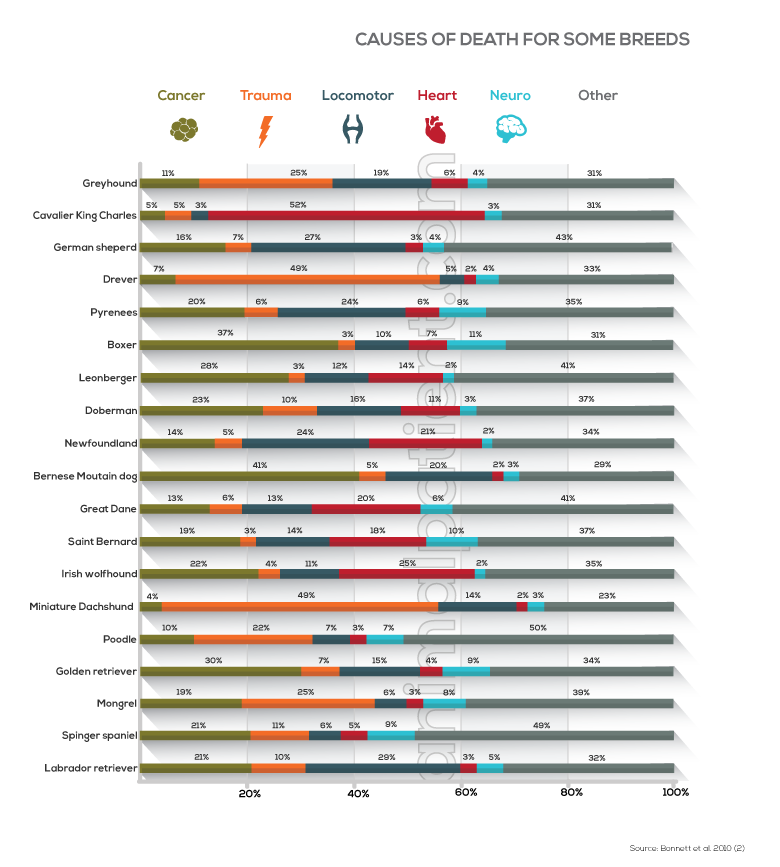 Maybe you haven't seen your dog's breed in the chart!

But you've got the picture: there are dramatic variations.

You should definitely try to know what kind of disease your dog is more likely to get when he will get older. Taking preventive action will improve his quality of life and his life expectancy.

The main diseases that cause death include:

As you can see, many of the diseases that are mentioned as a cause of death in the list above are not deadly by themselves. Often, the dogs are euthanized by their attending vet because their disease was at the final stage and it was not possible to maintain an acceptable quality of life anymore. Studies mention euthanasia in 55% to 85% of cases.

The main cause of death for Cavalier King Charles Spaniels is heart disease that they develop early in their lifetime. If you own a dog from this breed, you should start asking your vet when he reaches 6 years of age.

To a lesser extent, all small dogs are more at risk to get endocardiosis, the most frequent heart disease.

The high rate of death due to trauma in drevers seems due to their roaming habits. This is also one of the reasons why they are often chosen as hunting dogs.

Greyhounds with long and thin leg bones often experience fractures that may lead to euthanasia.

Although this is not true for all breeds, bitches are twice as much likely to die from tumors than males, due to the high proportion of mammary cancer.

On the contrary, males are 40% more likely to die from neurological causes.

The young dogs represent a different population when it comes to death causes.

They are of course less experienced and therefore more prone to accidents and trauma. They also have more often digestive disorders that may lead to death.

Behavior disorders come mostly from education mistakes made in the first months of life. Statistics also show miniature dogs are more at risk of dying young.

Get a summary of the post with our
DOG AGE INFOGRAPHIC

You may be interested in your dog's age by a sense of curiosity or because you have noticed some changes in your pet that you would like to interpret.

The issue of dog age is more important than we might expect initially.

It is important that you know in advance how your dog is going to progress throughout his life so that you can provide him with the best care.

Goldston (7) proposed a threshold for the beginning of aging. This is the time when the aging mechanisms start to work and when you should start considering your dog is old:

From this time on, you should be aware that changes in your dog are inevitable. They concern all body organs:

When your pet is getting older, as a master, you should be able to discriminate between normal aging and possible upcoming disease symptoms.

This is what will allow you to take the right decisions about when to take your dog to your vet. Thus, you will give your dog an increased chance of survival and increase the time it will spend with you, happily.

Gilles Ventejol is a professional in Animal Health. He holds a master's degree in life sciences. He has worked for more than 20 years in veterinary pharmaceutical companies, where he contributed to the development and promotion of many veterinary drugs. In this context, he has organized numerous conferences for the veterinary profession. His areas of expertise are parasitology, cardiology, nephrology, vaccines, and reproduction.