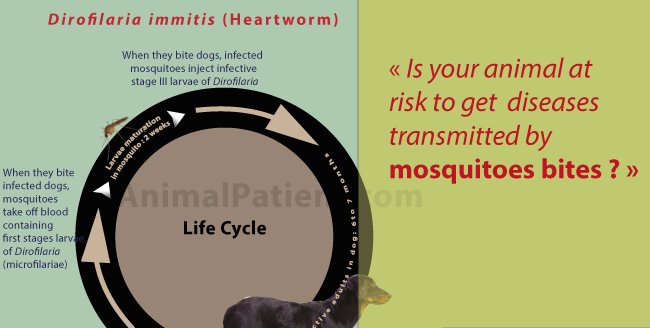 The answer is clearly yes!! In fact, every terrestrial mammal can be bitten, including domestic animals (cats, dogs, ferrets, rabbits…) and humans. Mosquitoes can transmit diseases that are potentially lethal such as dirofilariosis (heartworm) or leishmaniasis.

How and When Mosquitoes Bite dogs

They suck their host blood where they find the proteins necessary to the development of their eggs. Once they have ingested enough blood they rest until the egg-laying. Then, they resume their search for new preys and their blood.

Knowing that only female mosquitoes bite is of little help since it is almost impossible to distinguish them from males. Only their behavior, looking for the proximity to mammals, hints they should be female.

A mosquito chooses its future prey, human or animal, upon the odor, the emission of carbon dioxide and chemical signals from sweat.

It is well known that not everybody is equal with regard to mosquitos’ bites. In human, sensitivity increases with the number of bites and mosquitos prefer overweight, obese people or type O blood. They are also attracted by light colors.

All dogs can be bitten. Short-haired dog can be bitten all over the body. In hairy dogs, zones where the hair is thin are more exposed: ears, thighs, nose, muzzle and mammary gland. 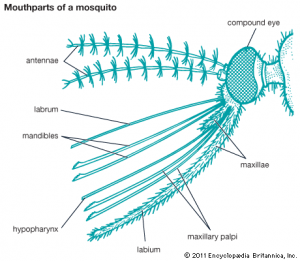 The bite process is incredibly complex (it is more a sting than a bite actually). All mosquito’s mouth parts are involved: the mandibles and the maxillae are used to cut and penetrate the skin, the hypopharynx to inject saliva, the labrum to suck blood and finally the labium serves as a sheath.

Here is a video showing how a mosquito looks for a small blood vessel within a mouse skin:

Mosquito’s bites result in small red bumps. They come from the local reaction of the immune system to the injection of the numerous proteins in the insect’s saliva. As for human they cause intense itching that lasts for a couple of days.

Dirofilaria immitis is a roundworm that needs two hosts to accomplish its development cycle:

The adult heartworms live in dogs’ blood stream where they shed eggs that hatch into harmless microscopic larvae: the microfilariae. When a mosquito bites an infected dog, it ingests some of the microfilariae that mature there into infective larvae (L3) in two-week time. 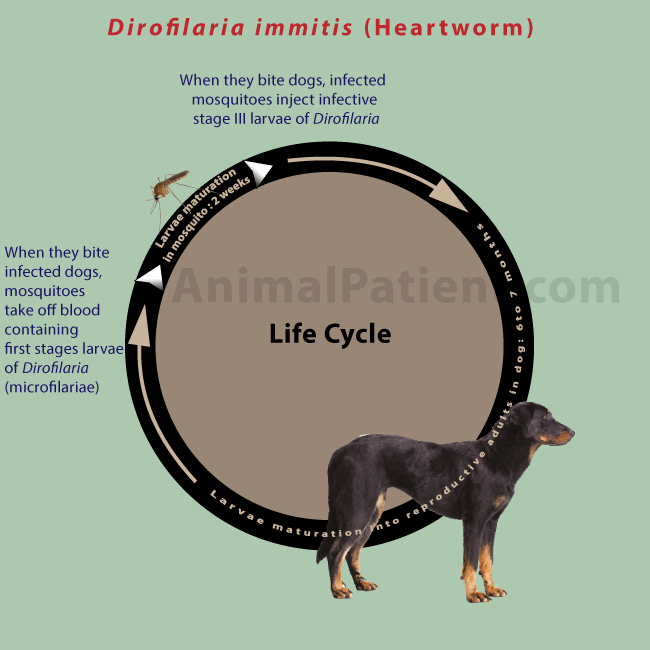 As heartworms live in blood vessel and arteries, it is no surprise that they end in the heart where they reduce heart output and blood flow.

But they can also damage the vascular network, cause immune reaction especially within the kidneys and more rarely cause infections. The most frequent symptoms include:

The treatment consists primarily of treating the heart disease and then of using an adulticide treatment against Dirofilaria. In endemic zones, it is generally advised that a dog is treated with a preventative treatment that kills the larvae before they reach the adult stages.

On the contrary to heartworms that can be transmitted by a variety of mosquitoes, Leishmania is transmitted only by a certain type of mosquito, the sand fly (genus Lutzomyia in the Americas and genus Phlebotomus in the other parts of the world).

No case of canine leishmaniasis has been detected in North America (except for dogs coming back from travelling abroad), but leishmaniasis affects many countries where it is a serious concern for both dogs and humans: parts of South America, Mediterranean area (both in Europe and Africa), China and southern Asia.

Leishmania is a protozoan (unicellular organism) that is transmitted via the sand flies bites. Dogs, or small rodents, are a reservoir where the female mosquito can feed and get infected. 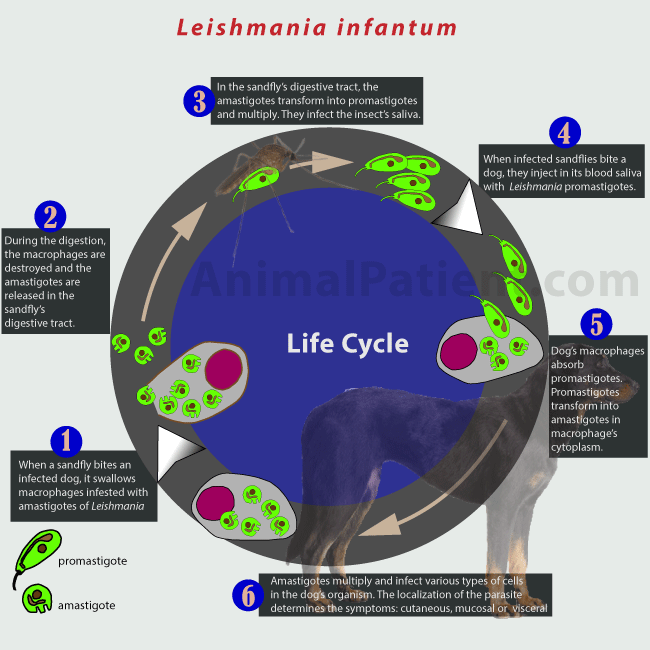 Although some dogs may remain asymptomatic for a long period of time, eventually nearly all exhibit severe symptoms:

In endemic countries, dogs serve as reservoir for Leishmania. Preventative protection of dogs against mosquitoes is strongly encouraged, since Leishmania can affect people with weakened immune system (children, ederly individuals or ill persons).

How to Keep Mosquitoes Away From Dogs

Mosquitoes lay eggs in stagnant water. Typically, in urban areas, they choose any type of place that can retain water such as pools, tires, casks, pails… The water should not evaporate too easily for letting the larvae the time for molting into adults.

It takes from a couple of days to weeks, depending on the mosquito species and outside temperature. Places where water is permanent (rivers, ponds) are less favorable: natural predators of mosquitoes’ larvae have time to install there and limit the level of infestation.

In practice, try to avoid, in the vicinity of your house, any kind of stagnant water.

Nevertheless, as adult female mosquitoes can travel on long distances to get the blood they need, you have to take additional precautions to protect your dog:

If possible, don’t let it get outside at dawn or at dusk when the female mosquitoes are the most active.

Use repellents. Pyrethroids (deltamethrin, cyfluthrin, lambda-cylothrin, permethrin…) are the chemical insecticides that have proven a repellent effect on mosquitoes. Some of them have been registered in Europe for this indication. DO NOT USE THEM ON CATS: because cats lick themselves, they will ingest too large quantities of the insecticide.

In many retail stores, you will find mosquitoes attractant devices, often blue light devices or chemical. We haven’t found data concerning their efficacy.

Gilles Ventejol is a professional in Animal Health. He holds a master's degree in life sciences. He has worked for more than 20 years in veterinary pharmaceutical companies, where he contributed to the development and promotion of many veterinary drugs. In this context, he has organized numerous conferences for the veterinary profession. His areas of expertise are parasitology, cardiology, nephrology, vaccines, and reproduction.